With Wayne's son Ben taking over the construction business leaving Wayne as the "Old Guy" on the job, the decision was made to pursue his dream of working full time in his woodshop.  He still helps Ben when needed, but is happiest designing and building in his shop.

Aside from farming and contracting, Wayne began building furniture in his Grandmother's old house which he had converted into a woodshop.  It started as a hobby with most of his creations being given to family and friends. 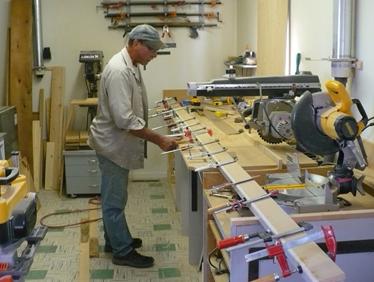 In 1984 Wayne and Leslie purchased the acreage where Wayne was raised.  There was a lone spruce tree on the acreage that was approximately 80' tall and leaned about 15 degrees.  Thus the name Leaning Spruce Farm.

Wayne is supported by his wife, Leslie, who is following her own dream as an Equine Canada Riding Coach and his daughter, Beth, who helps with trade shows and marketing.  Wayne and Leslie enjoy spending any spare time with their 5 grandchildren.